A new loan to Olam Agri, one of the world’s leading agribusinesses, will support the delivery of millions of tons of staple foods to developing countries, potentially feeding over 40 million people at a time of heightened food insecurity around the world.

The International Finance Corporation (IFC), the largest global development institution focused on the private sector in emerging markets, has agreed to provide a loan of up to US$200 million to Olam Agri, the food, feed, and fiber agribusiness subsidiary of Singapore-based Olam Group.

The loan will be used to finance the purchase of wheat, maize, and soy from Canada, Germany, Latvia, Lithuania, and the United States for delivery to the company’s processing operations and customers in developing countries that rely heavily on imports of these staple foods. These include Bangladesh, Cameroon, Chad, Egypt, Ghana, India, Indonesia, Nigeria, Pakistan, Senegal, Thailand, and Turkey.

The project is part of IFC’s global efforts to address food insecurity, especially for poor and vulnerable populations that have been hit hard by food inflation. Food prices have risen significantly over the last two years, driven by the impacts of COVID-19, adverse climate events, and the war in Ukraine.

The number of food-insecure people in the world has been rising every year since the beginning of the pandemic, with more than half of countries globally experiencing a worsening situation. An estimated 928 million people were severely food insecure in 2020, according to the Food and Agriculture Organization of the United Nations, an increase of 148 million from 2019.

The situation has been exacerbated by the war in Ukraine, which has impacted exports from the Eastern European country and Russia, which collectively produce a large share of key food commodities including wheat and maize as well as energy, fertilizer, and key components of fertilizer production, resulting in rising production and transportation costs.

Poor climate conditions and droughts in key producing countries including Argentina, Brazil, and the United States have worsened the outlook, driving calls for action from the public and private sectors.

The loan to Olam Agri will further support flows of key food commodities to developing countries, which have been reliant on sourcing from the Black Sea region. The goal is to help ease food price inflation particularly in fragile, conflict-affected, and poorer countries that are net-food importers, which are among the worst affected, and where food purchases comprise an outsized share of disposable incomes. This facility further supports us to continue to supply staple crops and ensure food security to some of the most populous countries in Asia and Africa most at risk of global food inflation.

We’re delighted to continue our long-standing partnership with IFC, aligning with Olam Agri’s focus on better access to food and nutrition for the most vulnerable and on strengthening global food security.

“The impacts of the COVID-19 pandemic, the war in Ukraine, and climate change are having disastrous effects on food security for developing countries, erasing years of hard-won development gains,” said Rana Karadsheh, Regional Industry Director, Manufacturing, Agribusiness and Services, Asia Pacific at IFC. “Our partnerships with key agricultural commodity-trading companies such as Olam Agri are crucial to maintaining the flow of critical food staples between countries with surpluses and deficits, ensuring better food security for the world’s poorest and most vulnerable populations.”

IFC has a successful track record of supporting Singapore-based companies in their efforts to expand in emerging markets and developing economies (EMDEs) globally, using innovative structures, local currency financing solutions, access to capital markets and knowledge gained from more than six decades creating markets and opportunities around the world. We have provided over US$5 billion in commitments to Singaporean clients over the last decade alone to support their expansion into EMDEs.

Also in the News 10,000 farmers on the Mekong Delta see incomes increase by 17% through successful public-private partnership between Olam Agri, GIZ and MARD Farmers in the programme’s trial plots saw a reduction in water usage by up to 40% and N-P-K fertiliser by up to 15% Improved quality of rice meets international standards and opens up new markets in EU and US Vietnam 10,000 smallholder farmers have made significant improvement in farming practices and quality of rice as part of the Market Oriented Smallholder Value Chain (MSVC) programme. Established in 2018, MSVC is a multi-stakeholder initiative between Olam Agri, German development cooperation Deutsche Gesellschaft für Internationale Zusammenarbeit (GIZ) GmbH, and Vietnam’s Ministry of Agriculture and Rural Development (MARD). Through this programme, up to 150,000 tonnes of paddies that meets international standards is produced, creating new growth opportunities for Vietnam’s rice exports to markets such as the EU and US.
Read More 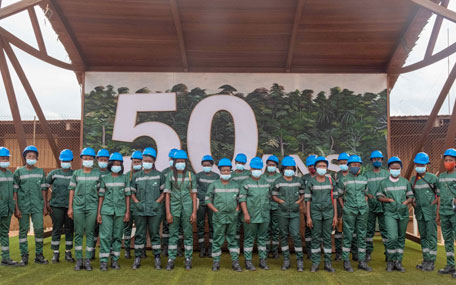 For 23 women from the village of Pokola, in Republic of Congo, this year's International Women's Day will be remembered as the beginning of an unprecedented journey. They committed themselves towards a livelihood they could never otherwise have imagined – and along the way, educating their husbands, families and future co-workers on equality and empowerment. Launched on March 8, 2021, Project MaC - 'Menagere a Constructrice' or 'Home Maker to Home Builder' allowed women in the north of the Republic of Congo to develop skills for constructing wooden houses, enabling them to secure roles with Congolaise Industrielle des Bois. The success of this project paved the way to launch the second edition on August 8, 2021. It was a moment of rejoicing for CIB, seeing the 23 women from the first edition graduate and welcoming the new batch of 20 women for the second edition. From 1968 until six months ago, forestry, wood and wood products operations were filled mainly by male workers at Congol
Read More
All News